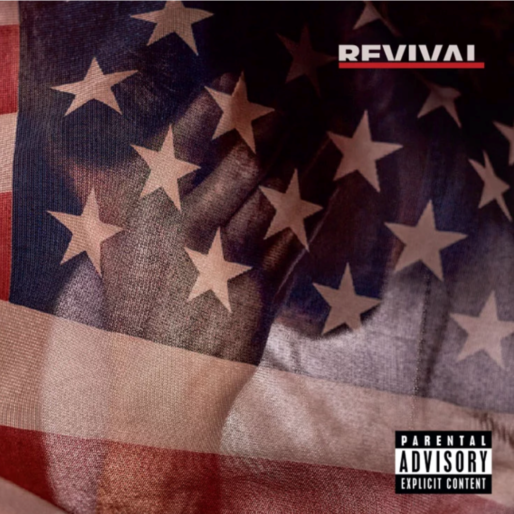 “People can try to reinvent themselves. I don’t think you can really change who you are, though, because who you are is pretty much where you came from and what you’ve done up to now.”

SHADY'S BACK, BACK AGAIN (tell a friend)

Hip-hop’s most notorious white rapper returns with his first full-length album since 2013. Looking back, when Eminem rapped angrily, whether it was in the character of Slim Shady or as Marshall Mathers, it was overwhelming – even scary. Insanely rapid, vitriolic word bullets were his calling card. In his most demented moments, it felt like he was capable of climbing out of your speakers and ripping your throat out with the same bone-chilling anger he directed at his ex-wife Kim, his mother, and himself.

However, if there’s anything Marshall Mathers has pushed time and time again is that emotions define you and your past is fuel to change and teach necessary lessons on how to withstand opposition. Revival is a multi-dimensional record with more introspection and reconciliation than ever before.

THE BEST THING SINCE YOUR MOM'S SPAGHETTI

Revival in four words? Confessions, explanations, apologies, and revival. Marshall revisits his past and current struggles, from his 2007 methadone overdose and his legacy as a father to his absolute hatred of Donald Trump. It’s an open-hearted rap diary without much of a narrative arc (as opposed to The Eminem Show) but still manages to give you goosebumps and leave a big lump in your throat.

Eminem’s past is heavy, to say the least. No matter what he goes through, he’ll always have a diss track up his sleeve. That’s how he processes the world and that’s what makes him legendary. I applaud the fire in his heart, I admire his perseverance, and I love his honesty. Let’s all remember his cold reply (read: 2013 single “Rap God”) to Rolling Stone’s criticism concerning his use of offensive lyrics. This time around, Eminem viciously freestyles about:

Revival lacks sonically. The haunting piano in “Believe” or the Yeezus-esque/weird synths in “Chloraseptic” just don’t stick their landings. Even the choir hums and hi-hats fade into the background at times. Don’t worry, you’ll come across a few catchy ones, such as “In Your Head” featuring The Cranberries’ Zombie chorus, “River” with Ed Sheeran’s minimalistic voice and flickering guitar, or “Remind Me”’s “I Love Rock N Roll” vibes.

But you know what? The true musicality of Revival stems from Em’s syllabic breakdown schemes and unpredictable rhymes. After all, he did find rhymes with orange (see his 60 Minutes interview). You might think this album feels déjà vu, but remember, this album is called Revival, which implies revisiting and reigniting the past.

Unlike many artists who tend to lose themselves in the “rise to fame” process, Marshall knows who he is and even considers himself “culture-proof”. He doesn’t care what you think; he’s going to say what he’s got to say and he’ll say/sing it proudly. That’s a true artist.

Given his talent, Revival is no less ambitious and highly rewarding than his previous entries. I got your back, Em. Till I collapse, or till the end.

“It’s okay to lose people but never to lose yourself.” – EMINEM

Grab a pair of headphones and check these tracks out:

May I have your attention, please? Will the real slim shady please stand up? Listen to all your favorite Eminem tracks on Stingray Music: