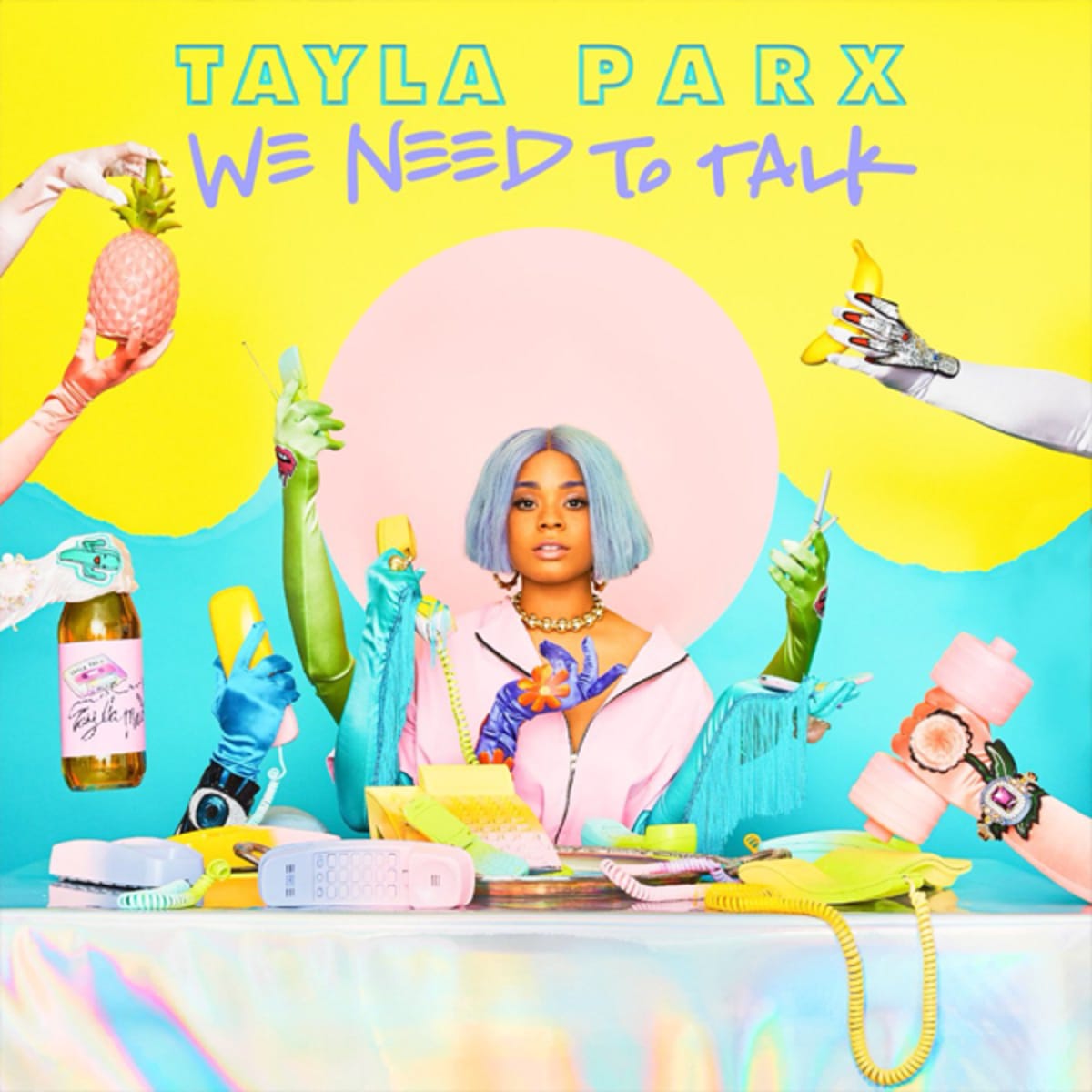 You all know my usual deal, I like to listen to music while doing something else and depending on how good an album is, I either find myself finishing the task with ease or in the case of We Need to Talk, sitting on my couch with my eyes closed listening to every lyric and getting lost in the story. At only 36 minutes long, the album is definitely a product of the streaming era since the songs are catchy and say a lot in a short time, but end too quickly for my liking. That isn’t on Tayla, the average song length has dropped almost 30 secs since hip-hop was born, so it makes sense that most artist now make shorter songs. Plus, they want you to repeat the track since they’re getting paid for every stream. My listening of that album alone may put Tayla and any future Tayla Jr. through college.

Opening with “I Want You” and “Homiesexual”, the fun tracks set the tone. I think it’s the fact that both are produced with that fun bass bop from Wynne Bennett that makes them stick out. Bennett also co-produced “PYNK” by Janelle Monae, and you can hear that same energy. “Homiesexual” specifically stood out with that syncopated ‘80s type of beat, which I haven’t heard anyone else do as well recently.

“Slow Dancing” is cool, not too heavy on message, just a nod to the things that Tayla enjoys as well as the struggle of enjoying them. Sometimes I don’t get what the artist was aiming for, and I’m ok with that. Is the song fun? Yes. Does Tayla have a dope voice and do dope songs? Yes. Moving on then, because “Me vs. Us” had me all kinds of happy. The layered production is full. It has weight to it, unlike some of the R&B pop that has come out in recent years. Tayla might be producing shorter tracks on par with the trends but her production level is above most, and “Me vs. Us” manages not to be minimal, but full, and that isn’t easy to pull off.

The interlude “What Can I Say” confuses the eff out of me. It was produced by Mike Sabath, who at 19 worked on some really good tracks (look up “it’s not u it’s me” by Bea Miller & 6lack). It sounds like a song: Tayla channels some Janelle Monae, then goes into full-on diva vocals for maybe five seconds and then the songs ends, leaving you wanting WAY MORE. I ended up running it back three times and was annoyed it kept ending knowing damn well the ending was coming when Tayla kicked it into gear. I guess if anything, the interlude was to bridge from an ok song like “Slow Dancing” to the emotional vocals on “Afraid to Fall.” Sampling the notification sound initially bugged me, but I can’t hate on it being well-used.

The “Happy Birthday” interlude is fun, but it was an odd choice to sandwich “Afraid to Fall” between two interludes, especially since it would have worked so well before the title track “We Need to Talk,” which sounded a bit like an Ariana track… and y’all this is where my world started to make sense. Up until this track, I was listening to this album blind. I was online and saw a tweet about Tayla Parx, so I clicked it, next thing I knew it was the album I wanted to review. So here I am listening to this album, and I get to “We Need to Talk” and I immediately said “Hmm this sounds like an Ariana track.” I do a quick web search to see if Ariana helped write the song, ‘cause at this point, I am full-on in blissful ignorance on who wrote for who. Well wasn’t I smacked in the face with the facts: Tayla is an actress, songwriter and an artist in her own right. I moved on to “Disconnected” and enjoyed 77 seconds of pure bliss and again had another new fave track on the album. “We Need to Talk” has all the markings of a pop/R&B hit and I am extremely happy Tayla kept it for herself. “Disconnected” is weird, but the type of weird I like and appreciate. You have to have some real confidence in your voice to put that type of filter on it and knowing it will shine through. Auto-tune “helps” a voice but that filter on a less talented vocalist could have hurt the track, and trust me, it did not.

Now y’all know DUCKWRTH got skills, so when he and Tayla got on the “Read Your Mind” track together, I had some very high expectations. The track isn’t what I wanted, but it was what the album needed. Sometimes you get stuck on the idea of an artist and in the short time I’ve known about Tayla, I was mistakenly putting her into a box when I should have just let the tracks be what they are. This track put me in my place. Soothing and relaxing but with a hint of authority juxtaposed with yearning in the delivery. Just listen to the track, I can’t possibly do it justice. It isn’t my favorite track but it’s the type of track I wish was, if that helps.

“Rebound” sounds like it took the base elements of 2000s hip hop & R&B collabos and updated them for 2019. I could hear this in a remake of Love & Basketball (NEVER REMAKE Love & Basketball, just saying it would fit if someone were dumb enough to try). The most interesting part of “Rebound” is how crazy the energy changes when it goes into the interlude “What Do You Know.” All aggressive and boastful but full of nerd references like Pinky & the Brain and DragonBall. I was lost and found all in one track.

Now we come to the end, with “Dirt,” “Tomboys Have Feelings Too” interlude and the closing out track, “Easy.” I want readers to listen to “Dirt” for themselves, only because I don’t know how I feel about the track. It’s light and maybe too pop for me, but that doesn’t take away from the song, it just felt like a Christian pop song (yes I know it has explicit lyrics). The production was almost too happy for me; I think that was what got to me. Meanwhile “Tomboys Have Feelings Too” interlude stayed on that same thread but then 40 secs in switches it up and gets a lil trap-y but only to fall back into the almost country-esque melody. Possible #YeehawAgenda sleeper track? We may never find out, but it’s fun to theorize.

Lastly we have “Easy,” and the lyrics are really nice. The whole sentiment of caring more than the other person in the relationship is not unknown to any of us. I dare say if you’ve never felt what the song is about, you may have never really been in love. All that to say, we can hear in “Easy” why Tayla is such a successful songwriter. When I look at who she has written for, it reads like the guest list to a private LA party and everyone has the vocal range to shatter glass or hearts. “Easy” is about that emotionless partner, feeling like no matter you do or say they don’t react. She makes you feel those feelings and ending an album with something like this pulled me back in after the last two really happy tracks. It is only as I write this that I realize why those two are so upbeat, ‘cause when you get to “Easy,” you feel it more.

Tayla Parx is an amazing singer-songwriter. Listen to her music now.