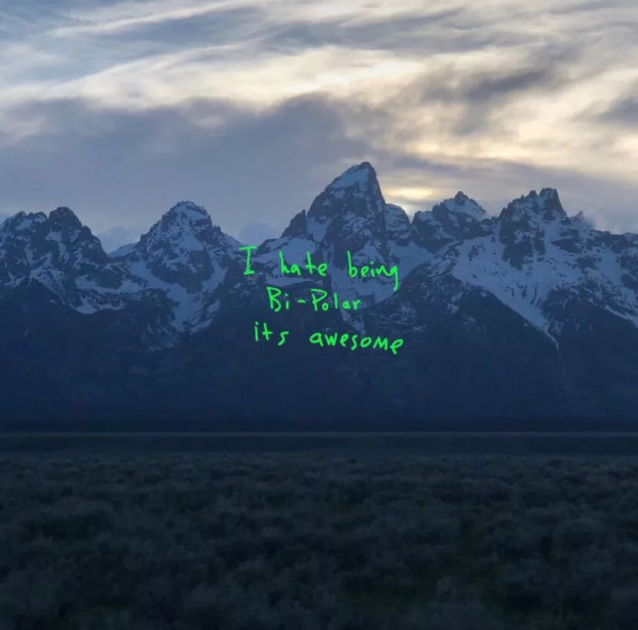 June 2nd was the day that all Kanye fans were waiting for: his 7-track studio album entitled Ye with a short running time of only 23 minutes was finally OUT.

Ye is different from any previous Kanye release where he would be extravagant in unique ways: in length (The College Dropout with a running time of 76 minutes), in guest appearance (My Beautiful Dark Twisted Fantasy featured musical legends like Elton John, Jay-Z, and John Legend, as well as comedian Chris Rock), and in number of chart-toppers (the classic club bangers “Pt. 2” and “Fade” from The Life of Pablo). This time, however, Kanye is not all about glam and glitter.

I Hate Being Bi-Polar, It’s Awesome

The message of the album artwork, “I hate being bi-polar, it’s awesome”, reflects Ye’s concept. The contrast represents the bi-polar mind state, constantly switching from one idea to another. It’s the constant struggle between depression and mania.

Kanye begins his album with “I Thought About Killing You”: the perfect Kanye introduction to a Kanye album.

“Today I seriously thought about killing you, I contemplated, premeditated murder, and I think about killing myself and I love myself way more than I love you so...”

It’s the first time that he references his troubled mind and dark thoughts so explicitly in a song. He even talks about killing this aforementioned another person, a “premeditated murder”, a planned murder carried out with a purpose.

A Plea for Help

Kanye follows with “Yikes”, which exposes his mental health issues and how his bipolar disorder affects his life and personal relationships.

“Sometimes I scare myself, myself / Tweakin’, tweakin’ off that 2CB, huh?”

Not only does he reference mental health issues in the chorus by referring to his fragile and scared state of mind, he continues by mentioning a common mental health symbol (tweaking) coupled with 2CB, a psychedelic drug.

Rumors have suggested that Kanye had been using psychedelic drugs, which had a significant effect on him. By declaring his drug use in song, Kanye is willfully expressing his mental vulnerability, which is quite different from his usual lyrical direction. Kanye’s not actually praising himself; the song is almost a plea for help. After declaring his fragile mental state Kanye goes into a fresh new direction with this album.

Let’s remember the events that happened before the release of Ye.

There was much controversy when Kanye was pictured wearing a “Make America Great Again” baseball cap signed by Donald Trump. Then, even worse, his infamous TMZ interview where he made slavery sound like a choice (whether or not that’s what he meant). He references the latter in the song “Wouldn’t Leave” by saying, “I say slavery’s a choice, they say ‘how ye?’ / Just imagine if they caught me on a wild day”. The second verse is another wink at his mental health since he says that his claim that slavery is a choice was not Kanye at his wildest moment. Could this be a way of saying that his mind can get worse? That this is just the beginning?

Further, in the album, Kanye shifts the focus onto his and Kim Kardashian’s not-so-perfect relationship. “No Mistakes” is an ode to his wife, with Charlie Wilson beautifully signing the chorus: “Make no mistakes, girl I still love you”

Kanye reassures Kim that he still loves her despite whatever problems they might face. He continues with “Ghost Town”, where again he pleas for love with Kid Cudi’s singing in the chorus:

Not only does he ask to be loved by his wife, but he almost begs for love from everyone else. Even if he tries to gain love and trust from people around him and his fans, he’s still not receiving what he wants. He alludes again to his drug problems and how, even though he knows it’s mentally toxic, it’s what frees him. 070 Shakes, singing with her unique and powerful voice, clearly expresses this thought by evoking self-harm and the desire to do so in the following verses:

“I put my hands on a stove, to see if I still bleed / And nothing hurts anymore I feel kind of free”.

Again, this echoes Kanye’s mental health issues, as exposed in the first few tracks, but adds the euphoria and dichotomy of psychedelic drugs and opioids that frees someone from harm, despite its known negative effects.

Kanye ends his album with “Violent Crimes”. Not a positive ending at all. He worries about his children growing up in a troubled world, where there’s nothing but crime. Could he be afraid of them growing up in a world where there are people like his father? Where people abuse drugs for artificial happiness? Where nothing is perfect, people aren’t perfect, and important problems like mental health issues do not receive enough attention? Perhaps he actually fears himself, but not for him, for his children.

All in all, this is a refreshing album. It’s not what we’re used to, sure, but it’s definitely one of the most meaningful albums Kanye has released.

He talks about love, self-hatred, and mental health. It’s both a plea for help and a plea for understanding, and that’s what I love about this album. Not convinced? Take a moment and listen to today’s rap. Some say that rap today has lost its meaning with what we call “mumble rap”: artists who don’t deliver real messages through their art. But Ye is refreshing. It’s a reminder that real rap is poetry; an artistic and thoughtful way to express what’s really going on in the world.

Ye talks about things we don’t want to talk about, like how mental health effects such a huge part of our population, yet we avoid it because it’s a scary and barely known subject. Remember this when you listen to Ye, because sometimes the hardest things to face are the most important things to deal with.