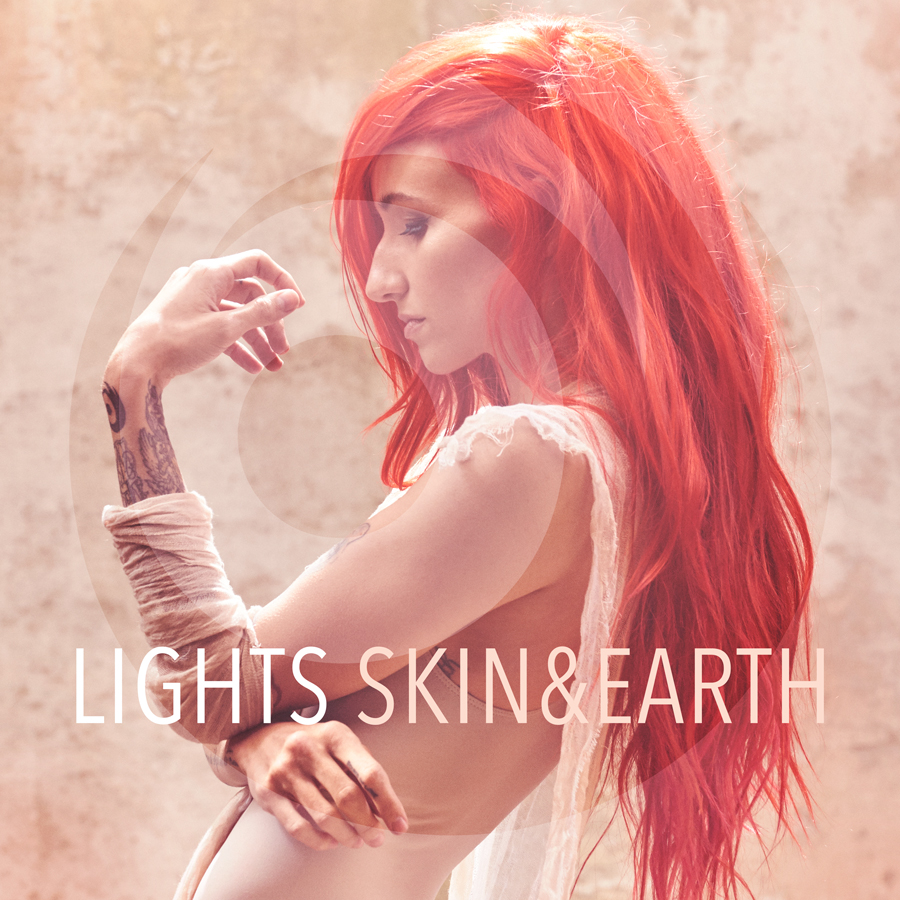 “No matter who you are, big or small, female or man, brave or not brave, you can still be empowered and feel strong.”

When we first listened to Lights’ 2014 album Little Machines, it was because we had played Siberia to bits. Over and over again, until every guitar riff was mastered and lyrics learnt by heart. On that reasoning, we expected the follow-up album Skin & Earth to be nothing but sensational - and packed to the gills with synths, insights, and clever melodies. WELL GUYS, OUR WISH CAME TRUE. This gal knocked it out of the park.

Lights has slightly switched up her musical direction and offers her loyal fans unrestrained lyrics, intensely compelling pop anthems, and bright sounds. As Lights embarks on her fourth journey with Skin & Earth, we’re thrown into a new dimension unlike ever before. Welcome back, Captain Lights.

You think you know Lights? Think again. If you’re expecting awakenings and nostalgia à la Little Machines, think again. But if you like art, honest lyrics, self-examination, melodic wonderfulness, and authenticity, come a little closer. Take a hard, long look at Skin & Earth. Because this is Lights now. And she just redefined electropop. And we’re absolutely mind-blown.

It all starts here, with a rush of blood to the head

There are so much more layers to Lights resumé than sparkly synthpop and fizzy electronics. All we have to say is: keep 'em coming!

This is deliciously perfect for nighttime listening: an album to crack out on a night run and enjoy the delicate orchestration that curls into your earholes. The slick lyrics and backbeats on “We Were Here” sound like raindrops splashing on your windowpane.

Lights is a continual caress; melting through the layers of sound on “Skydiving” and a sweet songbird on “Magnetic Field.”

“If I leave I believe I could never settle

'Cause I'm drawn to your core like a precious metal

And you balance me out.”

Skin & Earth is beautiful from start to finish

“This is based on internal, emotional stress and turmoil – stuff that I’ve dealt with and stuff that a lot of people have dealt with. I’ve always believed that all those battles can be fought, and you come out of this stronger. And that was the foundation of the story. At the end of the day, if nothing else, I want people, especially young women, to see in this character a little bit of themselves – see that an ordinary person can do amazing things and fight battles nobody else can see, and there’s no shame in that. In fact, there’s a lot of beauty in it.”

The red-haired queen exposes her vulnerability with layers of overlapping melodies. Skin & Earth has an urgency and novelty to it, and every single song is a precious gem. “Savage” is heavily packed with crescendos. From the clean repetitive guitar riff to the pounding drums, all you want to do is yell along with Lights: “What do you do when a man don't love you? / He takes the sun from the sky above you / How do you fix the damage? /How do you break the habit? /I never knew you could be so savage.”

Lights’ production sensibilities are glowing, her eye for detail and wit continue to shine through. “Where we could be giants / Bigger than the walls that hide us / Breaking all the laws of science / Looking at a sea of diamonds” she sings on the exquisite “Giants.” Every song is equipped with Lights’ constant on-key voice and emerges throughout the album, and subsequent listens are rewarding.

Oh, and the cherry on top? This badass and powerful artist created, drew, wrote, and designed a comic series Skin & Earth to go with it!

FROM LIGHT’S OFFICIAL WEBSITE: For advice on how to consume the Skin & Earth record and comic book combo, Lights suggests that “they’re better absorbed separately and each of them augments the other. So you can listen to a song on its own, and it’s something completely standalone. And then you can read the comic on its own, and it’s standalone as well. But when you put them together, and you start to connect the dots, there’s something so much deeper there.” Ultimately for Lights, the most important takeaway from the story of Skin & Earth is of a young woman entranced by a spirit that she and she alone must overcome.

LIGHTS, you light up the music industry. No pun intended. Much much love.

No more darkness with LIGHTS on Stingray Music! Make sure to check out the related channels to the right + stay on the pulse of the most recent news in music. Follow us on Facebook, Instagram, and Twitter.

Previous
JUNOS 2018 | Red Carpet Highlights
Next
Hair Metal Madness: Back to the ‘80s