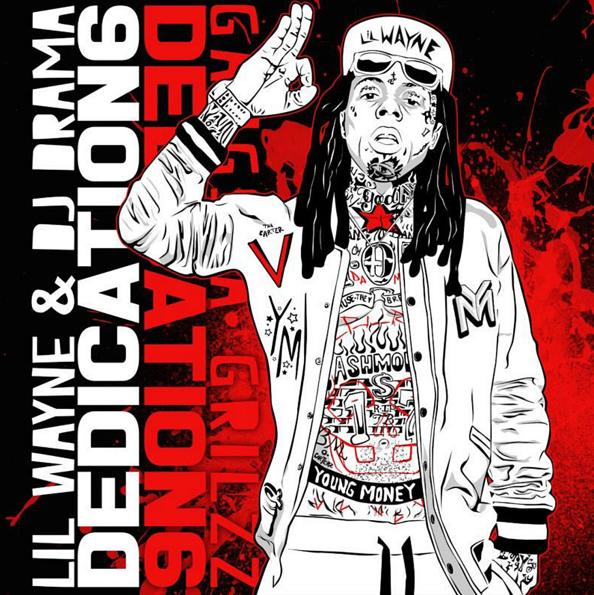 “When I started flirting with the hustle, failure became my ex, now I’m engaged to the game and married to success.”

“Best Rapper Alive”, Dwayne Michael Carter, Jr. AKA Lil Wayne hasn't shared a mixtape in his DJ Drama-produced Dedication series since 2013, so you're in for a 2018 treat in the form of Dedication 6, the latest installment. It's a more-than-solid effort, clocking in at a lengthy 15 tracks, with guest appearances from Nicki Minaj, HoodyBaby, Baby E., Gudda Gudda, and others - not to mention Weezy himself sounding surprisingly invigorated. The Nicki-assisted track, "5 Star," with its ominous backbeat, is an early favorite.

Dedication 6 almost overdoses on witty one-liners and swagger. Almost. Wayne’s done it again and again before, but keeps reminding us how he’s got hip-hop’s balls in a vice-grip and it doesn't sound like he’s letting go anytime soon. Wayne’s beat selection throughout the project is as representative of contemporary rap as his past mixtapes.

“XO Tour Life” and “Bank Account” mostly show off Tunechi’s skill as a crooner deftly working with a soul-puncturing beat. The beats get deliciously warped when Weezy hop on the mic for innocuous nine bars. Lil Wayne’s charisma sounds triumphant as he raps in an offhand singsong, and finds all these little melodies in the pocket of the beat.

There’s a sonic sensibility at work here: hard drums, smears of melodic synth, and Weezy’s own permanently fired-up voice. On his last few records, Wayne’s generally given himself room to be silly, to get loose with it. He never does that here. Young Carter skillfully connects every idea that pops into his head. It does get a bit heavy, but it still works because Lil Wayne has always been a better pure rapper than anyone’s been willing to admit.

The Best of Stingray Vibe