We sat down with indie-pop French duo Cats on Trees to talk about their new album Neon, inspirations, and evolution. Make sure to check them out on tour this fall in the US, Canada, and France.

1. What was the first and last album (or song) you streamed?

Yohan: Believe it or not, the first album I streamed was ANTI by Rihanna (I was always more a CD kinda guy!) I loved everything about that album: the production, the attitude, the songwriting, the awesome cover of Tame Impala‘s Currents closer “New Person, Same Old Mistakes,” retitled “Same Ol’ Mistakes”.

The last one I streamed must’ve been Travis Scott’s latest release Astroworld which welcomes interesting guests and producers like Frank Ocean, James Blake, Tame Impala... It has many different moods, and that album cover by David LaChapelle is just so cool.

Nina: The last album I streamed was Regeneration (2001) by The Divine Comedy. It’s obviously not Radiohead’s producer Nigel Godrich’s latest one, but it’s amazing. I’m also in love with the singer’s voice. It’s sweet and peaceful. The song arrangements are beautiful too as they’re similar to classical music, which I played for a long time.

2. Name a song you wish you wrote?

Nina: “No surprises” by Radiohead. It reminds me of my childhood when my father was very sick. I’d listen to it in bed, with headphones, and would instantly feel reassured. It’s almost like a lullaby, it has a soothing and universal touch to it.

Yohan: “Cecilia” by Simon & Garfunkel. I’d ask my parents to put it on repeat when I was a kid. The rhythm and melody bring be back to happy place.

3. What was the first song you learned to play?

Nina: When I was 9, my mother bought me a piano and hired a classical music teacher. The first song I learned was from La Méthode Rose by Ernest Van de Velde, a music theory book for piano beginners.

Yohan: At 10, I started a drum/guitar band with a friend. The first song we ever performed was “Hold Me, Thrill Me, Kiss Me, Kill Me” by U2. We also learned music by covering almost all of Nirvana’s songs, which we would then perform at local bars and small festivals, along with our first compositions. The venues were packed with teenagers from our school, those were great times.

4. If you could open for 3 different artists, who would they be?

We are huge fans of Arcade Fire. We saw their last tour at a festival in Europe and later their own show through a live stream. They are so talented and charismatic. Their set design and production is incredible, especially with the ring in the middle of the crowd.

The National is one of our favorite bands too because of their melodic and dramatic vibes. The feelings they communicate through their songs and live shows are pure and authentic. They hit you straight to the heart. It would be an honour to share the stage with them.

Tame Impala, of course, is on our bucket list of bands we’d love to open for!

5. Which song(s) do you cover in concert?

“Love You Like A Love Song” by Selena Gomez.

We’ve adapted it to our style, the delivery is quite emotional when we play it on stage. We love covering songs from artists that are different from what we do, so we can adapt it the “Cats On Trees ” way.

6. Which artist(s) would you love to collaborate with?

It would be a dream to create with Sufjan Stevens.

We also love French Canadian rapper Loud. It could be interesting to do a song in French with him!

Lorde, Pharrell Williams who’s an amazing songwriter, and the producers of The Weeknd which are mind-blowing.

In a wider perspective, we’d love to collaborate with film producers and visual storytellers that we could compose soundtracks for, whether movies, TV documentaries, video games, etc. We find it fascinating to create a musical mood that conveys perfectly the emotions of a specific visual. 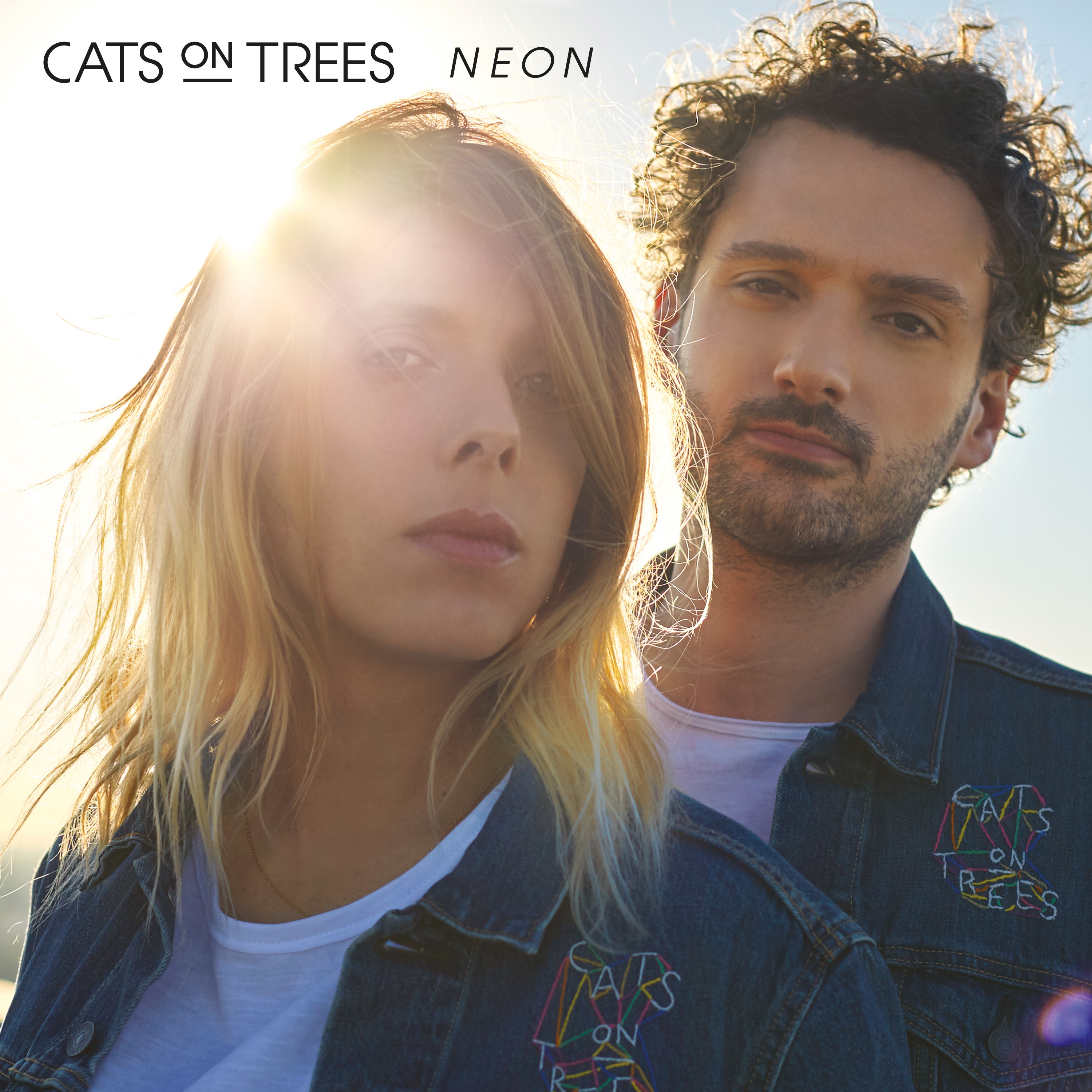 7. What were your inspirations for your 2nd album NEON?

Our first album released in 2013 sold over 220 000 copies and brought us on a 200-concert tour. That overnight success changed our entire lives and got us to meet amazing new people and travel to places we would’ve never been to, like Bolivia in South America where we shot “Sirens Call”. It wasn’t that long ago but all those experiences still inspire us. NEON encompasses those moments of travelling, being exposed to new cultures and languages, new styles of music, and it also reflects how we’ve both changed personally and artistically. Those shared experiences also help us create in an emotional and deep way. We are like a family because we know one another’s past and present. The friendship and loyalty we have towards each other is the basis of everything we do.

8. What are your wishes and goals for Cats On Trees? What’s next?

From a creative perspective, we want to write and collaborate with artists from different countries and cultures, whether for featurings, co-writing, remixes, etc. The key words to our creative process are curiosity and open-mindedness. We also wish to write more for other artists as we have tons of material and lots of different ideas.

We are currently on tour to promote NEON. From a live performance perspective, we love the idea of reinventing our shows, so we’ve added a massive organic design that changes shape in response to our hand movement, and added 3 magical musicians that helped us rearrange our songs for the stage.

Globally, we hope to continue touring a lot to discover new countries, people and art forms,that will feed our imagination to write more music. As of September 13th 2018, some of our wishes are becoming reality as we’ll embark on a short tour in Montréal, Lavaltrie (with Salomé Leclerc), Québec (with JORDANN), Toronto and NYC.

Listen to Cats on Trees on: