BELLFLOWER, the nine-piece indie-folk, jazz act from Montreal recently released their second full-length album, Upside Down. I was in attendance for their album launch a few weeks back and I was blown away by their presence and the mastery of their craft. They pulled it off with their usual eight-member lineup augmented by an additional seven especially for that occasion. That’s 14 musicians onstage total! It was bliss! 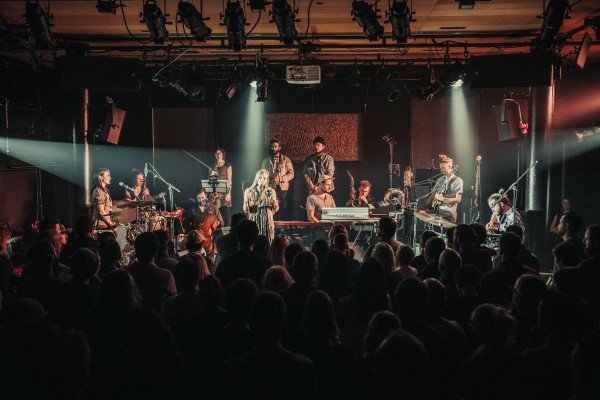 I recently spoke with their singer Émilie Pompa in anticipation of their upcoming showcase at the Mundial Festival.

It’s been three years since the release of your last record. I found your newest one Upside Down to be more lush and dreamlike. Tell me about where this concept emerged for you guys and what brought on this new sound?

Upside Down was one of the first songs that I wrote. I was at my parent's cottage with a friend who was going through a very rough time in his life. We sat down and started to play music and I decided to tell his story in this song. It was a particularly grey and foggy day. I was completely inspired by the surroundings which I think are well portrayed in Upside Down. It gave me a strong guideline to what I wanted the album to represent. It made me write about other people than myself and I started to write stories about what my friends were going through in their lives. I discovered that a lot of them were struggling in different ways and it made me realize that our path in life is not a simple straight line. There are a lot of ups and downs, there is no sweet without sour, no renewal without destruction.

Upside Down represents that critical moment of fear, doubt and anxiety that you have to embrace and accept, because you have the power to choose what the next move is going to be. So it's alright to take risks in life and be afraid. Like the burning phoenix overcoming darkness, rising to the challenge and being reborn from his ashes to become more powerful.

I was one of the lucky ones attending your album launch at Centre Phi a few weeks ago. I loved the augmented band you had on stage that night. All of us in attendance were blown away, how was that experience for you?

It was an incredible experience! To be able to share live with everyone the orchestral arrangements that we worked on for this album was wonderful. It felt so powerful and rich on stage. I felt like a rock that a tidal wave was crashing on! And again it was about taking risks because it did come with certain challenges, but it was completely worth it! I really hope we're going to get the chance to do that show again! 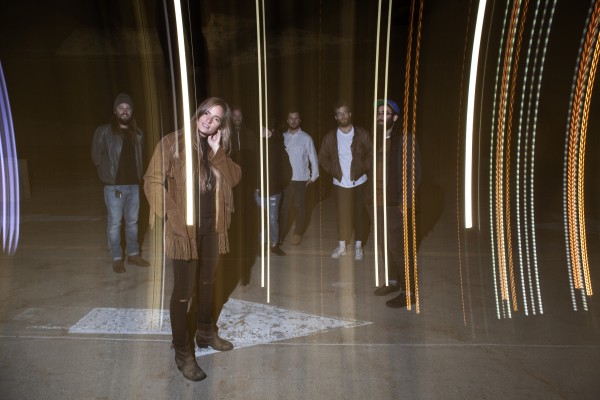 Speaking on being such a big group, can you give me more insight into the songwriting process and how you go about starting a song all the way to the finish line? Is it a team effort or do all songs start off with you alone?

They mainly start with me alone, except for two songs on this album where William Côté composed guitar riffs that I found interesting and decided to build songs with them. For the rest of the songs I usually start playing either a guitar, piano/synthesizer or bass line idea. Then I work around that. I try to record as many instrument parts as possible at home on my computer…. I sing the trumpet and saxophone lines to give me a good idea of the horn and wind harmonies. It's a really fun process!  When the instrumental part is done, I then record some vocal melodies and try to figure out what the lyrics are going to be.

When I feel I have brought the most that I could to the song, I present it to William and we arrange it together. He has such good ideas and pushes me to think outside the box. I usually let him create his drum parts as well as the percussions.

We then bring the song to the rest of the band members and that's where the magic happens. Even though I have certain precise things written down for them to play, it is important for me to give them liberty to express themselves in their playing. Every idea they have is welcome and tried. I even leave some blank sections, with certain guidelines, and then ask them to interpret it in their own creative way.  They are incredibly talented musicians. That's how our songs come to life!

Knowing that you are so many musicians involved in the creative process I’d love to know a bit more about your personal musical influences as a songwriter.

There are so many of them, but one who really inspired me as a songwriter is Andy Shauf. I was so moved by his album The bearer of bad news. The way he tells a story is so captivating.

One of the great poets of all time for me would be Tom Waits. He is such an amazing artist whose songs are so visceral and real.

Bon Iver for me is an artist who has the capacity to renew himself beautifully. He has a strong signature style that is very inspiring.

Alabama Shakes is also at the top of my list. Very powerful and soulful. They really get to me.

Lastly can you please tell me what you feed your drummer to get him to play drums AND acoustic guitar AND sing at the same time? As a musician myself, I felt a bit insecure knowing there are drummers out there doing it all.

Will is such an amazing musician! He's very curious and has a thirst for discovering new music. He is also a great musical arranger and is very interested in many musical branches such as sound engineering.  Being very passionate, he is always up for challenges of multitasking. We work very closely and always produce our albums together.

You can catch BELLFLOWER next week in Montreal for a showcase during the Mundial Festival on November 19 at the Cabaret Lion d'Or. Expect more surprises from the band in the coming weeks. Follow them on Facebook and Instagram.

🎵 You can listen to them on our Quebec Emergent Playlist here.