Every year on March 8th, the world celebrates International Women’s Day. Starting in the early 19th century with women’s rights activists like Susan B. Anthony, women’s rights movements worldwide have shaped a world in which equality of the sexes might not be fully established in all aspects of life but is making great leaps and bounds.

While contemporary music genres like pop, jazz, and country started at a point in time when gender-equality had already developed, classical music originates from a far more conservative historical context. For centuries, early music of medieval times was largely centered around Christian practices and ceremonies. It comes, therefore, as no surprise that religious regulations such as the Pauline Commandment of Silence banned women from voicing opinions and participating in the art of music. The commandment was effective from the third century to modern times. Especially in Catholic societies, it was strictly adhered to, but also had an impact on non-Catholic communities. 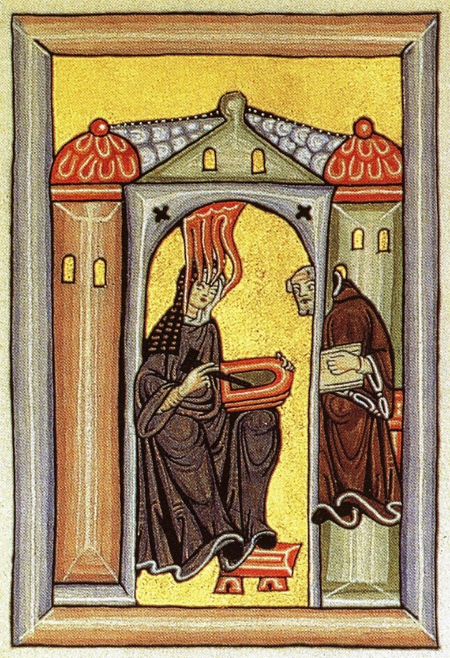 One of the first female pioneers in Western music was German Benedictine abbess, writer, composer, philosopher, Christian mystic, visionary, and polymath Hildegard von Bingen. Born around the year of 1098 in Bermersheim vor der Höhe, Hildegard von Bingen is one of the best-known composers of sacred monophony. Hildegard’s Ordo Virtutum, an independent Latin morality play with music encompassing over 80 original compositions, remains one of the largest bodies of work of the medieval repertoire. Today, it is argued that the subject of her work was not just the praise of God, but also the female anatomy and desire, connecting her to a history of female rhetoricians. Hildergard von Bingen remains one of the most popular composers of medieval repertoire ever, with her work interpreted every year at the biggest festivals of early music around the globe. This potential feminist in disguise, working despite the Commandment of Silence, still touches the lives of many early music fans today.

After Hildegard von Bingen left her mark with Ordo Virtutum, it took centuries for another woman to make history with her impact on the world of music. Between the 16th and 17th centuries, Italian singer, lutenist, poet, and teacher Francesca Caccini published what is today considered to be the first female-composed opera: La liberazione di Ruggiero. She was the daughter of Renaissance composer Giulio Caccini. Two more magnificent women shaped the repertoire of the 1600s: Barbara Strozzi (1619-1677), a Venezian composer known for her vocal compositions for soprano singers, and Isabella Leonarda (1620-1704), known for her instrumental compositions, such as the famous “Sonate da chiesa.” However, only from the 19th century on, women in classical music started taking the center stage. During this time, the acquisition of musical skills by women was encouraged, but social conventions of Europe and America limited their display to private occasions, rather than public appearances. We can only imagine how many outstanding works of women composers never got to see the light of day due to social restrictions! Only a few, often related to or trained under more well-known composers, Fanny Mendelssohn (1805-1847), Clara Schumann (1819-1896), Teresa Carreño (1853-1917) and Cécile Chaminade (1857-1944) started paving the way for females in classical music at the turn of the century. Today, these women composers are known to have contributed to the classical repertoire, even though their names and works might not be as prominent as those of their male counterparts. Others at the time were in less privileged conditions: for example, Gustav Mahler’s wife Alma’s composing efforts were put to a halt by her husband – unfortunately, not an unusual scenario during this time.

Classical music today has made incredible progress in gender equality since Hildegard von Bingen’s days. At institutes for classical music education and among orchestra musicians, the gender-ratio is close to reaching a 50/50 point. A 2019 study on “The Representation of Male and Female Musicians in World-Class Symphony Orchestras” by the UCL Institute of Education of the University College London shows that today, 60.32% of musicians in leading orchestras are men, while 39.68% are women. The same goes for classical music education: for instance, in 2017, 42% of those studying conducting at German music colleges were women.

While female representation in classical music is increasing in recent years, leading positions are far from a 60/40 distribution. According to a 2017 article by classical music magazine Bachtrack, only 8 of the top 100 conductors of today are women. The first female conductors in history arose around the same time as women started taking more prevalent roles in music composition, too. In the 19th century, a historical figure that catches the eye was Elfrida Andree. Born in 1841, in Sweden, the organist, composer, and conductor was one of the first women to fight for a seat at the table of conductors. Brazilian Chiquinha Gonzaga, born 1847, and French Nadia Boulanger, born in 1887, also played important roles in paving the way for some of the most celebrated women conductors of today. Arguably the most influential pioneers in their field are American conductor and Grammy-winner Marin Alsop and Australian Simone Young, who remain figureheads of a new generation of women conductors to this day. Alsop, born in New York City to musical professionals as parents, was the first woman conductor in many major roles of classical music. She was the first woman to conduct a Viennese orchestra, the first artist to win both the Gramophone Magazine’s Artist of the Year award and the Royal Philharmonic Society’s Conductor Award in one year, the first and only woman awarded the Koussevitsky Conducting prize by the Tanglewood Music Center – just to name a few of her achievements. Next to majorly contributing to the rise of women conductors by paving the way with her impressive resumé, she also actively supports women in classical music. For instance, she founded the Taki Concordia Conducting Fellowship for female conductors in 2002. Her similarly acclaimed fellow conductor Simone Young also contributed to the representation of women in classical music with her achievements. For example, she was appointed the first female conductor to be named chief conductor of the Sydney Symphony Orchestra. Next to Young and Alsop, JoAnn Falletta, Xian Zhang, Mirga Gražinytė-Tyla, and many more also contributed to the representation of women in conducting over the last decades.

The topic of “female conductors”

Female conductors have come a long way in recent years. Just between 2013 and 2017, the number of women among the top 100 conductors worldwide has doubled. However, because of the still dramatically uneven percentage of gender-distribution of world-class conductors, female leadership in classical music is still publicly regarded as a rarity. The first question a woman conductor is asked in an interview usually revolves around the topic of being a “female conductor.” Many of the interviewees seem hesitant or unwilling to answer or avoid the question altogether. Are they afraid of irritating male colleagues or the orchestra management they work amongst by addressing gender-inequalities? Do they avoid talking about what it means to be a woman conductor because they do not want to be “political”? 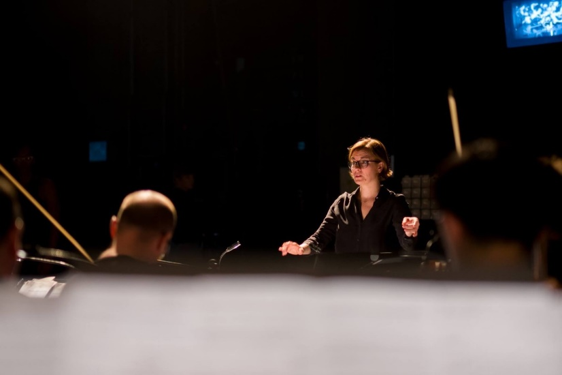 To answer these questions and get some insights into the work of women conductors, Stingray Classica has teamed up with equality-empowering online magazine Music is her passion and conducted in-depth interviews with internationally acclaimed professionals of our time. We spoke to Greek conductor and composer Konstantia Gourzi, German conductor Romely Pfund and Serbian-born, NYC-based conductor, composer, and professor Daniela Candillari. They talk about their issues with answering questions about gender and conducting, inclusivity in classical music, and the future of the genre. “Only recently, since four or five years, it is en-vogue to invite a female conductor, and many organizers, who a few years ago found women terrible, suddenly want to invite women to be ‘in’. It is great that more women are invited, but the way it is done is again wrong. It’s all about the content and not the packaging,” says Konstantia Gourzi on the matter. Daniela Candillari agrees with her – she prefers being celebrated as an artist first and foremost, as opposed to constantly discussing the topic of women conductors. “When I was active as a pianist, nobody ever asked me what it was like to be a female artist. Now that I am a conductor, I don’t think it should be different. I see myself as an artist, I want to be defined by the work that I do,” says Candillari. At all costs, conductors like them want to avoid that the classical music world, in an effort to empower equality, reduces women conductors to their gender. All should have equal opportunities and be celebrated for their talent and hard work, not only because they are part of a minority – this goes for women, and all underrepresented groups within the world of classical music alike. 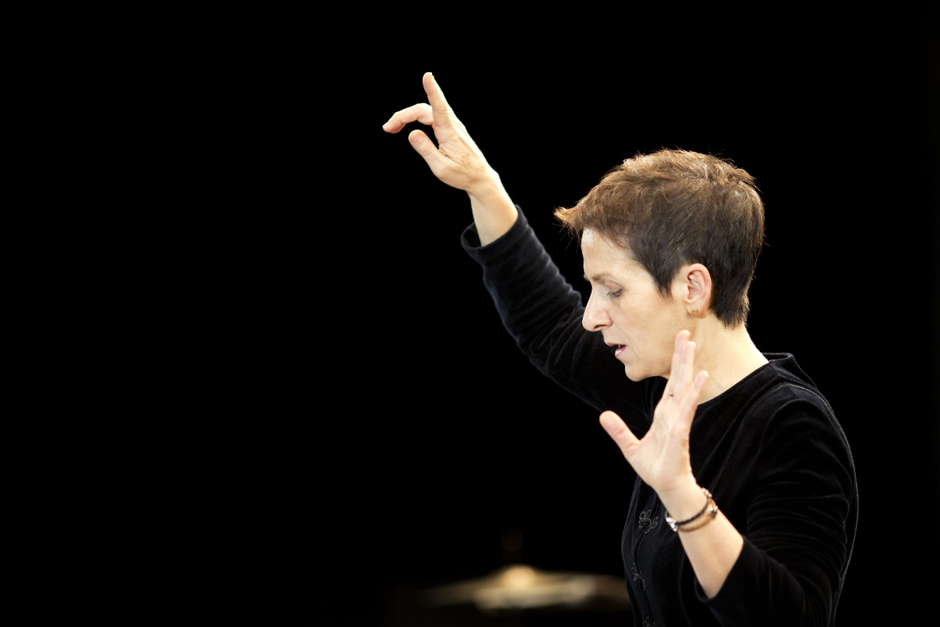