Ray Manzarek told me that he was dying. He had an incurable disease, he said in an email dated April 2nd. “I’m hoping that was a belated April Fools joke,” I replied.

“Unfortunately not a joke,” he wrote back. Within seven weeks, he was gone, at age 74.

But I knew that Ray had not been kidding. His bad news came as an explanation for why he was turning down a request I’d received, on his behalf, to do a mini-concert that would be streamed world-wide.

In the years I’ve known Ray—dating back to about 2005, when I began work on the book, The Doors by the Doors—he’s never declined an offer to go somewhere and talk, or play music; preferably both.

In fact, one reason we’d stayed in touch all these years was because he and I, having had fun at a couple of bookstore events, wanted to take our act (His act, really, with me tossing in questions and wisecracks) on the road. We’d do the lecture circuit, appear at universities, music conferences—wherever they could set up two mikes and a keyboard.

But the economy—and Manzarek’s continuing work with Robbie Krieger, playing Doors music, and with Michael McClure, blending poetry with jazz—kept the idea on a back burner.

It came up again late last year, when we got together for Qello’s world premiere of the remastered version of the film of The Doors at the Hollywood Bowl in 1968. At Bob Weir’s TRI Studios in Marin County, we sat for a chat, with some of the questions coming in via Facebook, where fans were watching the film, and us.

At one point, I mentioned how, at the bookstores, Ray had masterfully deconstructed “Light My Fire” on a keyboard, revealing all the musical influences that went into the famous intro and the extended instrumental break. He tried to hand-sync his way through a bit of his explanation of the music; at one point, he gazed wistfully at a keyboard behind him, sadly inaccessible. I told our viewers that a version of Ray’s mini music discourse might be on YouTube. Now, thanks to Qello, you can view it. Thanks, too, to the audience member at the Booksmith, on Haight Street in San Francisco, who captured our session that November evening in 2006.

After our Qello interview, Manzarek sat for a brief, on-camera interview with Suzanne Joe Kai, a filmmaker who is producing a documentary about me. He told her she could make use of any Doors music and footage she wanted. Suzanne was stunned by his generosity.

Moments later, he bid us all goodnight  – but not before saying, once more, that he was ready to hit the road with our little Door-and-pony show, whenever our schedules allowed.

And then came April and the shocking word from Ray himself, and, now, the most devastating news. It’s said that, in Germany, he died surrounded by Dorothy, his wife since Doors days, and two brothers, James and Rick.

The family has requested that, instead of flowers, friends and fans make a donation in Ray’s name at www.standup2cancer.org 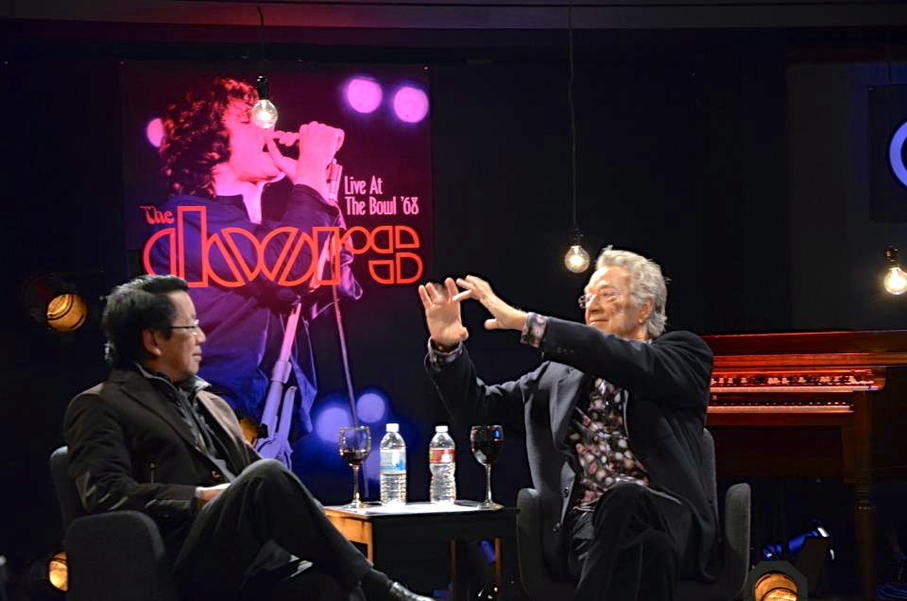 Previous
Artist Spotlight: Anthrax, Megadeth, Slayer & Metallica
Next
The Dead at the End of ‘So Many Roads’