With influences ranging from Metallica to Alan Jackson to Frank Ocean, it’s no surprise that Sebastian Gaskin’s sound is hard to nail down. But whether he’s shredding a guitar solo or hitting you right in the feels with his velveteen vocals, one thing’s for certain: “You can expect a lot of what you’ve never heard before,” Gaskin says. “Unique sounds. Dreamy soundscapes. Wet, lush reverbs.”

And despite Gaskin’s seemingly sudden emergence on the Canadian music scene, those unique sounds have not gone unnoticed. This summer alone, he secured gigs at the Winnipeg Jazz Festival, the inaugural sākihiwē festival and an RPM Live event in Toronto. His sultry first single, 6 AM, also reached number one on the Indigenous Music Countdown.

But according to Gaskin, we ain’t seen nothin yet. With long-term ambitions of supporting his family and headlining a world tour, he’s currently working on a six-track EP slated to drop in Spring 2019. In the meantime, we sat down with him to talk about all things music. Here’s what he had to say about his first guitar, discovering The Weeknd and much, much more. 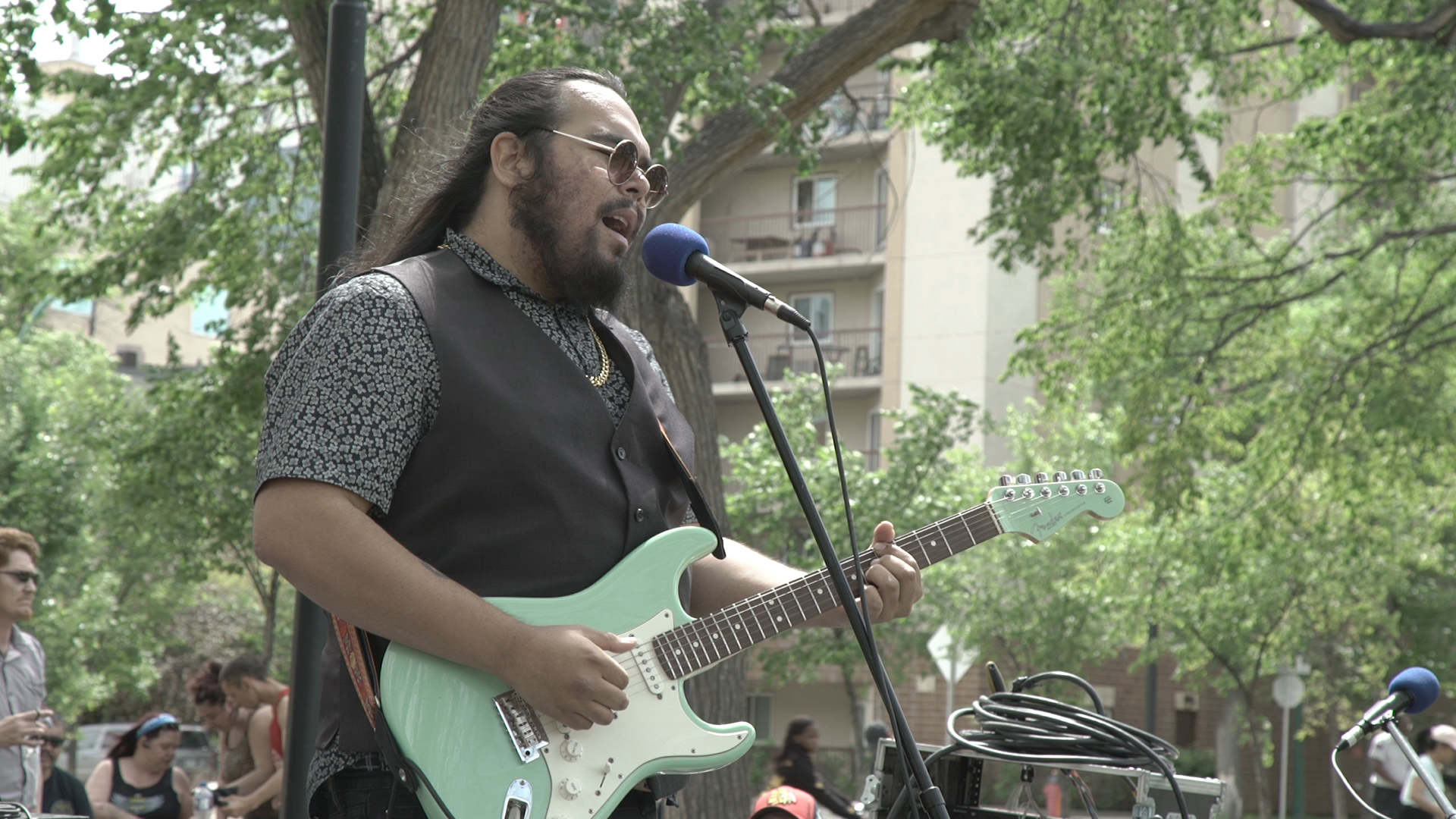 How and when did you get into music?

I was born in Thompson, Manitoba, but raised in Split Lake, a reservation about an hour and a half north of there. Growing up, all my aunts and uncles played the guitar, so they’d be around the house, singing and listening to music. I remember in Grade 3, my mom enrolled me in this after-school fiddle club and within a few months I’d already been moved up to the advanced class. So I think I always kind of had a knack for music.

As I got older, I hung around my cousin Tyler a lot, and he was really into Metallica. I remember hearing him pick out Fade to Black and I just thought it was the coolest thing and asked him to teach it to me. After learning that song, I convinced my mom to buy me my first guitar, an electric blue First Act. It was a complete piece of shit, but it did the job for the first year.

When I outgrew that, I tried to convince my mom to get me this black Epiphone SG that I saw on the wall at a barber shop we went to. She said I could get it when I showed her that I was actually progressing and becoming a better player, so it was a really good incentive to expand my knowledge and practice every day.

Eventually, I played in bands with my friends on the reserve, but nothing too serious. Then, one of my ex-girlfriends introduced me to The Weeknd, this is back when he first came out, and it changed everything. I was living in Toronto then, and I’d have to drive two hours to school and two hours back, so I’d spend hours a day just cruising down the highway and singing along to Weeknd records. That entire year kind of helped me find my voice and find my tone as an R&B artist.

Who are you listening to right now?

Do you prefer writing or performing?

It’s kind of 50-50. The thing I like about writing is that I’m able to let out any pent up emotions I might have. As for performing, I just love seeing the looks on people’s faces. With the way I look and the way I sound, I kind of have a shock factor. I really like that aspect of surprising people.

Walk us through your songwriting process.

I try to open my mind up, and my channel to the universe, and just let the energy flow on to the paper. After the song is written, I figure out what it means and revise it until it’s right. I still have songs from months ago I’m still editing.

How many original songs are in your repertoire right now?

Right now I have about 12 or 13 I’d feel comfortable performing.

What do you do when you’re not making music?

I like to cook. I like Italian. I also just got into painting this year; I’m trying to branch out into the visual arts. Hanging out with women, going out for drinks. Just living my best life.

Do you find as an artist that you can still listen to music as a fan, or are you always picking it apart and analyzing it?

It’s different every time. I remember when I first started listening to Frank Ocean I was just a fan, but after listening to it for so long I started to pick up different aspects of the music and the writing. 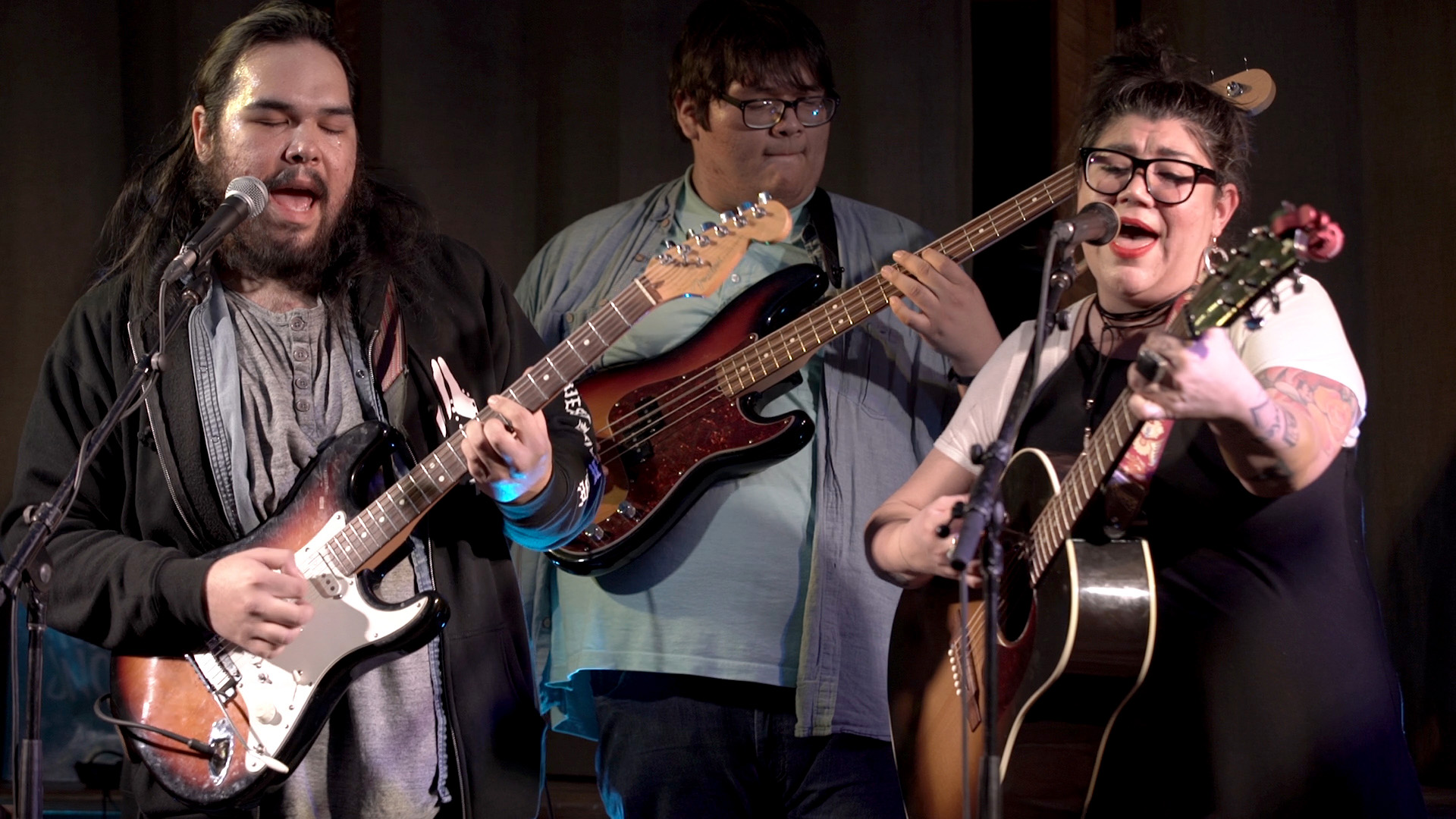 Winnipeg has a pretty good Indigenous music scene. Have you always been plugged in, or is it something you’ve discovered more recently?

When I was about 12 or 13, I went to one of the first Manito Ahbee festivals. I still remember seeing Joey Stylez perform, and I got to see backstage and stuff like that. So I’ve known about the Indigenous music scene here, but I’ve definitely seen a curve upwards in the past few years. There’s definitely a lot more openness and less exclusivity in the community now.

When we first met you earlier this year, performing was still relatively new to you. Half a year later, you’ve done Winnipeg Jazz Festival, RPM Live, sākihiwē and some other pretty big gigs. Has being onstage gotten easier?

I used to get the jitters real bad; I’d be shaking, my hands would sweat. But the last couple of gigs I’ve just got on stage and done the thing. Not to say it’s lost its excitement, but it’s a lot easier than it was eight months ago.

At the same time, it feels a lot more serious than it used to. I feel I have more of an obligation to continue down this path now. I actually just got this hand tattoo to kind of solidify my place on the musician’s path; like, I have to make it as a musician now.

This summer you received the 2018 Indigenous Music Award for the Ka-Kee-Nee Konee Pewonee Okimow Most Outstanding Manitoban. Tell us about that.

I was taken completely by surprise. I got an email saying they’d like to have me perform a couple songs at a pow wow, so I showed up and before I got onstage, Eric (Robinson) brought out a hand drum and presented it to me. I literally had no idea. I was supposed to make a speech but I was at a complete loss for words.

What do you hope to accomplish through music that you couldn’t in other ways? In other words, why do you make music?

I’d like to get my family off the reserve, to get them a nice big house. I’m very family-motivated and want to be in a position to help them as much as possible. One of my ultimate end goals, at least on the personal ego side of it, is to have a world tour and perform in front of as many people as possible.

How do you define success?

Success is a mindset, really. Even though I haven’t achieved all my goals, I feel like I’m already successful. I’m able to do what I love on a daily basis and make some money from time to time.

What’s coming up for you in the next couple months?

Just writing a lot and prepping for the release of my EP. I’m in the process of recording the vocal tracks for that right now and aiming for April (2019).