When Phil Everly died early this year, a lot of music-loving writers got their chance to pay tribute to one of the greatest rock and roll acts of all time: the Everly Brothers.

Big as they were in the late ‘50s and through the ‘60s, they weren’t that easy to write about. They famously broke up in 1973 in the midst of a concert in California, and didn’t reunite until a decade later. And although they each made solo albums as well as joint projects over the past three decades, none of them dented the charts, except for EB 84, a 1984 effort that included a song Paul McCartney gave them. They did precious little press, and the media had few reasons to pursue them.

Now, 30 years later, with the passing of one of the Everlys, at age 74, the spotlight shines again on one of the most influential vocal duos in pop history. Sure, Phil and older brother Don learned from those who came before – the Louvin Brothers come to mind – but they intertwined their voices with country-flavored ballads, rockabilly and rock and roll songs so beautifully that they, in turn, influenced many who heard them on radio and TV.  They include the Beatles, Simon and Garfunkel, the Hollies, the Mamas and the Papas, the Righteous Brothers, the Byrds, Gram Parsons & Emmylou Harris, and numerous Motown groups – pretty much anybody who sang in close harmony.

The spotlight here is on that September evening in 1983 when the brothers reunited in concert, at the Royal Albert Hall in London. (They’d previously performed there and had an affection for the UK; witness their great album, Two Yanks in England, done with plentiful assistance by members of the Hollies).

Although it was an emotional moment, the brothers played it straight. After arriving onstage from opposite wings and hugging briefly, they got down to business, playing their hits and pausing only once (at least on the resulting film) to greet the audience, with Don doing all the talking. Prompted by Phil, he said, “It’s good to be back.” He referred to their breakup as “our necessary vacation. We enjoyed part of it, and we hated part of it..”

Don, it turns out, also does all the solo vocals on the Everlys’ many hits, with Phil chiming in on the high parts. They rolled through most of them: “Claudette,” “Walk Right Back,” “Crying in the Rain,” “Cathy’s Clown,” “Take a Message to Mary,” “When Will I Be Loved” (which Don noted was written by “our baby boy Phil”), “Bird Dog,” “Bye Bye Love,” “Wake Up, Little Susie,” “All I Have to Do Is Dream” (a gorgeous rendition, eliciting a satisfied smile from Phil at the end), and a bunch more. They are generous, and they also dip back into their Kentucky childhoods, performing a few numbers from their early album, Songs Our Daddy Taught Us  (recently covered by Billie Joe Armstrong and Norah Jones).

But it’s not a jukebox. The guys, dressed in tuxes and backed by a full band, provide many lovely moments, especially for fans who know some of their roller-coaster history. And Don plays with the melodies of his solo bits. Check out “Let It Be Me.” But when it comes time to harmonize, they lock eyes and synchronize their voices, and their parts, perfectly. 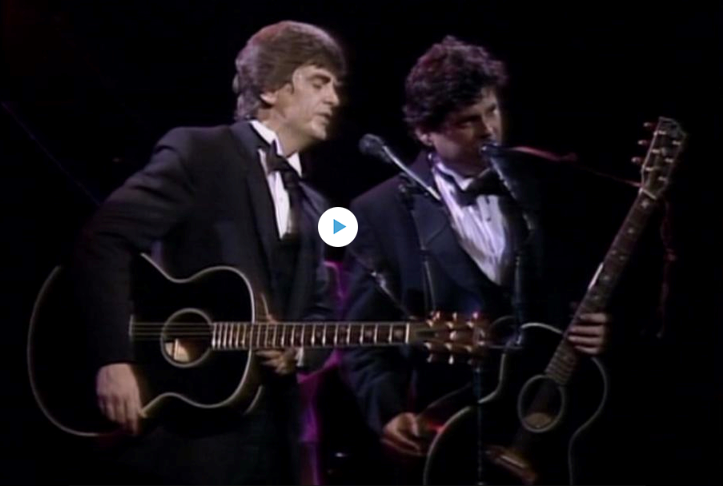